In The News
Donate 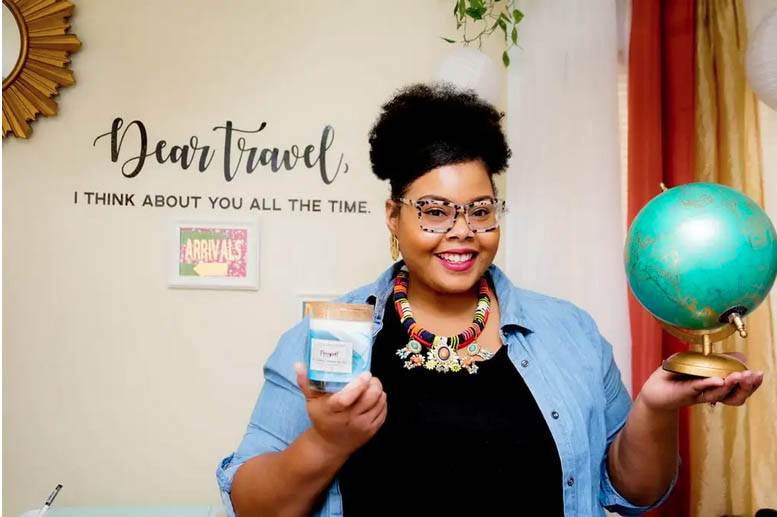 A team of economists in a recent analysis of eight states is reporting a surge in business registrations in the weeks after the public received federal stimulus payments. The increase was particularly dramatic in majority Black neighborhoods.

But Black business owners and people familiar with the Black business community in Connecticut say that furloughs and available funds weren’t the only factors that drove people to become entrepreneurs — in many cases, the new businesses were born out of a need to escape from the stress of the pandemic.

Stephanie Aris, an ICU nurse at The Hospital of Central Connecticut, said she needed an emotional outlet to cope with anxiety she was feeling during the pandemic. She found one in launching her own business.

“It initially started with me just trying to find a way not to be depressed,” she said.

When the hospital was hit hard with COVID last spring, Aris said it was hard to come home from work and not be able to hug her two sons. After the shooting of George Floyd, she said she fell into a sad state and she couldn’t pull herself out of it.

Unable to sleep, Aris started watching soap-making videos on YouTube. She bought candles to make herself feel better and read books about candle-making — the genesis for her candle-making business, Stephshop2020.

Her first scent, “breath of fresh air,” tried to express the sensation of coming out to the parking lot after a 13-hour shift at the hospital and ripping off her N-95 mask. She made it with a mixture of three fragrance oils — sweet grass, sunshine and fresh air.

Aris is just one of a large number of Black business owners who have become entrepreneurs since the pandemic shutdown the world. It was also the case for Nicole “Nikki” Forbes-Shaw, the founder of the eyeglasses-design business ReFramed. Forbes-Shaw decided to start the business as a way of distracting herself after her grandmother died in early 2020.

At the time, Forbes-Shaw was working as a nurse in the psychiatric unit at Yale-New Haven Hospital. When the pandemic hit, the hospital sent her to work with COVID patients, and throwing herself into the business became a way to avoid worrying about whether she or her husband, a corrections officer, were going to die from COVID.

Forbes-Shaw said she didn’t see her parents for eight months. When her husband wasn’t given protective equipment at work, she said she saved N-95 masks and brought them home to him. She started working longer hours to earn more money, when many nurses were afraid to come to work. Forbes-Shaw said there were nights when she and her husband would come home, strip in the garage, lie in bed and just look at each other.

So in her free time in between 16-hour shifts and pursuing a master’s degree, Forbes-Shaw dedicated herself to the business. She launched the business in August with her first collection of frames, “The Collective” — a reflection of the need for solidarity during COVID.

“What better way to spin it around [than] with COVID situation,” she said. “We all collectively worked together as a team to make things better.”

Making diamonds out of ashes

According to data provided by the Connecticut Small Business Development Center, between March 2020 and April 2021, the association received 593 calls asking for advice about starting a business. Williams said they would ordinarily receive between 160 and 165 of these so-called “pre-venture clients.”  179 identified as Black or African American, an increase from 98 during the same period of the previous year. The data show 64 Black-owned businesses that started between March of 2020 and April of 2021, compared with 30 during the same period in the previous year.

Joseph Williams, a capital access team lead and business advisor at the Connecticut Small Business Development Center, said that the entrepreneurship was a reflection of the Black community’s historic tradition of relying on personal initiative during difficult times. Williams said it was also a practical necessity — many of the new entrepreneurs he spoke with were looking for a way to support themselves after having suddenly lost their jobs for an indefinite period of time.

“When you have that much stress, you will think out of the box to be self-reliant,” said Williams.

Ann-Marie Knight, acting executive director at the Black Business Alliance in New Haven, echoed Williams, saying that the Black community was willing to take risks to build these businesses and support themselves.

“We never have been able really to depend on a traditional income to sustain our families,” she said.

Knight said that their membership, which counts about 1,500 businesses, increased 50 percent in the last five to six months. She said that this past May, she talked to 25 start-ups. In one month, she said, they generally talk to three or four start-ups.

Sarah Thompson, founder of ShopBlackCT, a website that features over 1,500 Black businesses in Connecticut, said that at least half of the businesses on their site were founded within the last six to nine months. She said that many of these businesses are based out of people’s homes, and conducted exclusively online.

“These businesses are starting in people’s kitchens, in their bedrooms,” said Thompson.

Thompson said she was “blown away” by the creative things people came up with, despite it being such a difficult time.

“Some businesses have wanted to make diamonds out of ashes,” she said.

Putting in money to make money

Williams said that some of the entrepreneurs he spoke with did use stimulus checks as a jumping-off point for their businesses. But several of the business owners who spoke with CT Examiner said that their initial investments came from their own savings.

This was the case for Ricardo Gibson, a physical education teacher at Jonathan Reed school in Waterbury. He started his business, MGI Fire-Arms, last June. Gibson said he didn’t rely on stimulus money, instead putting the initial business costs on credit cards.

“I understood from talking to people, you have to put in money to make money,” he said.

Gibson said he’s been shooting for five or six years. It was something he did as a stress-reliever, but when the pandemic hit and he was stuck at home, he decided to turn it into a business.

“I could do this myself. I’m a teacher — it shouldn’t be hard,” Gibson said he thought at the time.

Since then, he’s taught shooting and offered gun permit certification courses to about 400 students — 10-15 people per day over the summer. He said he’s made his initial investment back “pretty quick.”

Alisha Moten said she did use stimulus money, and also unemployment, during a four-month furlough from her job at the start of the pandemic, in order to build Golden Adorns Artistry, which she registered in January 2020. Moten said the business has helped her connect with something she dearly missed during the pandemic — travel.

“I love traveling and experiencing new places,” said Moten, who traveled to Jamaica, South Africa and the Dominican Republic before the pandemic grounded her last year.

Each of these businesses may have sprung from the needs of the owners, but they quickly became a way to satisfy consumers who were also looking for ways to satisfy their own desires and needs.

Moten said that her customers told her that her island aromas reminded them of the Caribbean getaways they had to put on hold last year.

“It really did help my customers have some kind of mini-vacation,” she said.

Oddette Staple-Brown, who started her own candle-making businesses, Oh D’Luxe Candle + Co., in September, said that candles were a popular item because people looked for ways to pamper themselves during the stress of the pandemic.

“A lot of people were big on self-care because the pandemic was so depressing,” she said.

Gibson said that some of his students came to him because of the protests in the aftermath of the death of George Floyd. He said that people felt that they needed a way to protect themselves and their homes.

A sense of community

While a number of business owners cited the growth of online shopping and online marketing as key to their business models, several also said that most of their customers, at least initially, were part of the local community.

Knight at the Black Business Alliance said that she saw a new feeling of camaraderie and supportiveness within the Black business community. It was something they’d talked about in the past, she said, but it took COVID to make it happen.

“There’s a sense of — we’re all trying to create an environment that’s whole and healing, and we’re all a part of that,” she said.

Business owners echoed this. Staple-Brown, for example, said she started her business marketing to people in her church community. But she said that the large number of people shopping online allowed her to expand.

“There are people who were actually looking for ways to spend money,” she said.

And while Gibson made a promotional video that garnered 20,000 views online, he also tried to partner with gun stores and rental spaces in the local community. Forbes-Shaw said she discussed setting up a pop-up shop with the person who did her eyebrows, and she did home consultations for people all over the state, but said she also got a lot of her business online.

“I didn’t want to kind of make it just for one specific group of people. It’s for everybody, it’s all inclusive,” she said.

As the world re-opened, it presented another challenging question to these business owners — go back to their former full-time jobs, or stick with their new businesses?

Most say they are trying to find a happy median.

Gibson said that although he’s back to teaching in the classroom, he plans to continue with his business on the weekends.

Moten went back to work in July, but she said she wants to reach a point where she can focus on her business full-time.

Forbes-Shaw is still working as a  nurse, which she said will always be “her first love.”And she was recently promoted. But at the same time, she’s working on expanding the brand even further, and thinking about long-term goals.

Forbes-Shaw is still working as a  nurse, which she said will always be “her first love.”And she was recently promoted. But at the same time, she’s working on expanding the brand even further. She launched her second collection, “While Black” in October, and she’s contemplating her long-term goals.

Before she started her candle business, Aris said she asked to reduce her hours to part-time. But she said that even if she were to do her candle-making business full-time, she would stay on as a per-diem nurse.

In the meantime, she said, she’s planning on taking advantage of the fact that people are meeting in person again, showing her products at pop-up shops and continuing to offer candle-making classes in Bridgeport.